Here are 16 of the potential failures or damages that can occur on a solar farm and how they could impact operations if not addressed in a timely manner.

1. Perimeter Fence Damage. Damage caused to the perimeter fence can immediately have a negative effect on facility operations. Whether the damage was due to vandals, a storm or even an animal, this is an item that needs immediate attention. Not only can people be injured due to the high voltage produced by the system, but the expensive equipment is at risk if intruders enter the area with intent to destroy or steal items. Regular inspection and quick response to this is crucial for all solar farms.

2. Ground Erosion. A naturally occurring process in nature, soil and ground erosion are caused by water and wind. Expected as a gradual occurrence and planned for at a certain periodic rate, sudden erosion can have a deleterious effect on a PV plant. Loss of topsoil can lead to reshaping of the ground and the creation of channels, holes and slopes in earth. This could cause racking to shift affecting the ability of panels to generate the energy. It could also lead to flooding and destruction of equipment. Proper and frequent site monitoring will alert asset managers to anything out of the ordinary happening that could put operations at risk.

3. Transformer Leakage. Routine maintenance that certifies that transformers are in good condition every year helps avoid transformer leakage. A transformer leak can cause land contamination and other safety risks. Knowing if a leak is present and planning for maintenance to repair or replace it can be key in keeping energy generation at a maximum. There several ways to carry out preventive maintenance in transformers; however, monitoring transformer oil temperature, pressure and level to prevent a transformer from leaking in the first place is the best way to avoid down time issues. To prevent fatal errors, a parameter range is set and automatic alarms can be issued to check on site before the problem scales.

4. Various Inverter Damage. Taking the low voltage, high current signals from PV panels and converting into the voltage compatible with the utility grid, inverters are core components of grid-connected systems. Monitoring of inverters is of high importance, since changes to voltage and frequency may occur that affect performance as well as the safety of those in proximity. Inverter damage may lead to the complete failure of the PV plant or partial string outages as a result of defective inverters. Inverter failures are responsible for roughly 80% of PV system downtime. Clearly a response to any inverter damage must be taken quickly.

5. Broken Conduit. A broken conduit poses danger of shock as well as chaos on the operating system as charges are uncontained. When the construction of a site is finished and the plant goes into operation, earth movements may happen as the ground stabilizes. These movements can cause broken conduit and other issues with cables. Measuring isolation on cables ensures underground runs are damage free. This is important because broken conduit can cause a cable to break or damage the insulation which can cause a fire and personal hazards.

6. Combiner Box Damage. With the ability to simplify wiring, combiner boxes combine inputs from multiple strings of solar panels into one output circuit. Normally 4 to 12 strings are connected to a combiner box. If damaged, they pose a safety risk as well as a major decrease in productivity. 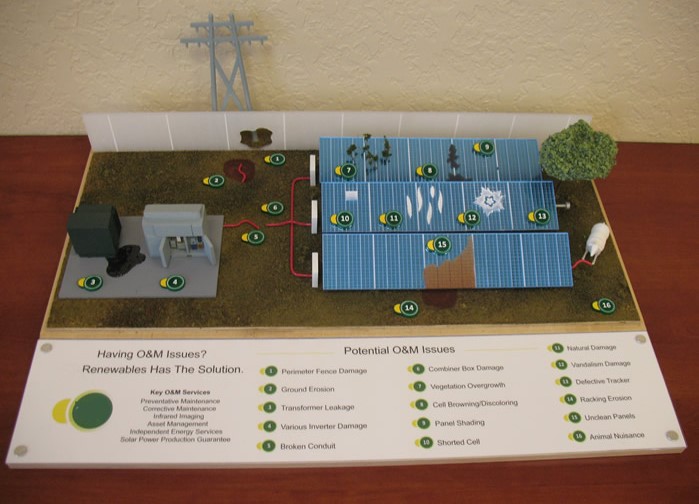 7. Vegetation Overgrowth. Vegetation can transform from a benign nuisance in to a major issue very quickly. In addition to attracting animals that then cause their own brand of destruction, vegetation can shade cells, interfere with wiring and affect structural integrity.

8. Cell Browning/Discoloring. In addition to providing power, UV radiation will lead to aging in panel cells, seen as browning and discoloration. This degradation in the film leads to impaired output and productivity.

9. Panel Shading. When designing a PV plant, it is critical that trees and other obstructions are cleared. PV cell electrical output is very sensitive to shade. If shaded, cells do not add to the power produced by the panel, but they absorb it. A shaded cell has a much greater reverse voltage compared to the forward voltage of an illuminated one, it can absorb the power of many cells in the string and the output will fall drastically. Removal of any trees or structures causing shading will help optimize power output.

10. Shorted Cell. A shorted cell can impact productivity if not addressed in a timely manner. Production defects in semiconducting material often go undetected before PV cells are put into solar panel assemblies. Identifying these defects through testing via infrared imaging has been used for more than a decade. This efficient, cost-effective test and measurement methods for characterizing a cell’s performance and its electronic structure help ensure maximum energy production.

11. Natural Damage. A hail storm or hurricane can wreak havoc on a solar power plant. Damaged panels, or wind torn racking and other equipment can severely decrease output or completely put a system out of commission. Keeping a pulse on the severe weather and inspecting the equipment following a storm is necessary for the overall health of the solar farm.

12. Vandalism Damage. Vandals pose a major threat to any PV facility. Whether they are stealing or destroying wiring, panels or other equipment, system damage can occur. A solar farm in North Carolina had golf ball damage by a neighbor who decided to use the array as the 18th hole. Detecting this damage through the use of solar monitoring equipment minimized outages and losses.

13. Defective Tracker. An exceptional tool to enhance early morning and late afternoon performance, trackers can increase total power produced by about 20-25% for a single axis tracker and about 30% or more for a dual axis tracker. Defective trackers can contribute significantly to lowered performance output and should be serviced as soon as detected.

14. Racking Erosion. Eroding structures can be a nightmare for a PV facility. Once the structural integrity is degraded, risks to proper water and wind flow within the facility are elevated which can gravely impact the functioning of the facility. As racking moves, panels are moved from their optimal positioning and energy generation suffers.

15. Unclean Panels. Dust, snow, pollen, leaf fragments, and even bird droppings – all can absorb sunlight on the surface of a panel, reducing the light that reaches the cells. Clean surfaces result in increased output performance over the lifespan of the equipment. Routine cleaning should be a part of all O&M plans.

16. Animal Nuisance. No matter whether an animal burrows under a perimeter fence, jumps over it or goes right through it – animals need to be kept out of a solar farm. Once inside the perimeter, they seem to have a way of finding wires to chew and unknowingly destroy equipment.
Having an O&M agreement for a solar farm is a must. Paired with a monitoring system , many of these issues can be prevented and energy production maximized. If you are an asset manager in need of an exceptional O&M company, contact Energy for them.